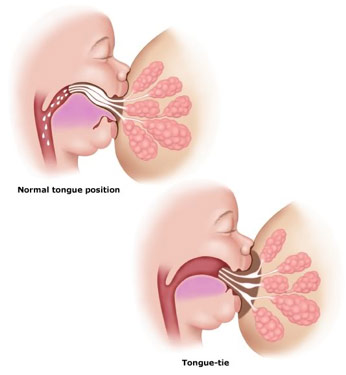 Normally, the tongue is attached to the bottom of the mouth by a short membrane called the frenulum (or frenum).  Tongue tie or ankyloglossia, means the tongue has a shorter frenulum than normal, which tethers the tongue and restricts its movement. Because the tongue must be extended under the nipple for breastfeeding, tongue tie can make breastfeeding difficult or impossible for the infant and painful for the mother.

Symptoms of tongue tie include:

There is some debate as to how best to treat tongue tie, but the Academy of Breast Feeding Medicine and the American Academy of Pediatrics support frenulectomy for babies who have symptoms.  Treatement of tongue tie is done early, to improve tongue mobiity for breast feeding and speech development.

Treatment of tongue tie is a procedure called a frenulectomy, which is clipping the membrane under the tongue.  A frenulectomy can usually be performed on infants in the hospital after birth or in the office with or without anesthesia. If the frenulum is thicker or difficult to reach, it may be recommended to be done in an operating room.

If an infant is not having feeding issues, there is still the risk of future feeding issues or speech delay. However, it is less important to proceed immediately with a frenulectomy in this case.  The parents may opt to wait and see if problems develop.  However, because the infant tolerates this simple and quick procedure so easily, performing the procedure as a preventative measure is also a reasonable option. This decision is made in consultation with a pediatric otolaryngologist.