Gregory Ha is a high school senior at Harvard-Westlake in Los Angeles, CA. He is also a competitive swimmer. He researched and wrote this article as part of the Student Mentorship Program through the Osborne Head and Neck Foundation.

Michael Phelps stunned the world in the first week of the Olympics, setting a record for the most Olympics medals held by an individual athlete. Many would say he is “not normal” with a wingspan stretching at six and a half feet and an appetite of twelve thousand calories a day. Yet despite these amazing statistics, Phelps is still, at the end of the day, a human being. And as any regular human, being exposed to the swimming pool as constantly as Phelps is, he is susceptible to a condition called swimmer’s ear.

What is “swimmer’s ear”?

Swimmer’s ear, known medically as otitis externa, is an infection of the ear canal or the outer ear. 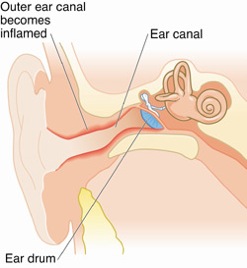 The term “swimmer’s ear” is misleading because you can also contract an infection from scratching the ear or from foreign objects getting stuck in the ear. Nevertheless, water exposure in an irritated ear is a common cause of swimmer’s ear. Swimming in polluted water makes otitis externa more likely, but any water in the ear can cause symptoms.  Contracting swimmer’s ear from chlorinated pools is still possible, especially if there is irritation or a scratch in the ear before swimming (i.e, from q-tips, in-ear headphones, etc).

What are symptoms of otitis externa?

There are many symptoms of otitis externa.  Some to watch out for are:

What is the treatment of otitis externa?

If Phelps got otitis externa during a season of competition, it could have a serious impact on his ability to compete.  This is because treatment involves:

This means avoiding swimming for about a week.  For a professional such as Phelps, who is in a major competition like the Olympics where not participating is not an option, ear plugs would be prescribed to prevent worsening.

Despite his theoretical susceptibility to swimmer’s ear, you do not hear Phelps suffering from it during major events.  Likely it is because that second factor, ear trauma, is not present.  This means he likely is not a Q-tip user and does not use in-ear headphones. Before every swim in a major competition, to get himself pumped up, you will notice he rarely (if ever) uses in-ear headphones.

I swim a lot and am worried about getting otitis externa.  Can it be prevented?

There are ways to decrease your risk of getting otitis externa.  They include:

Using an alcohol/vinegar mixture is thought to eliminate bacterial growth inside the ear and has been rumored to help.  However this has not been proven.  Further, with good ear hygiene (avoiding ear trauma), the ear should not get infected and should not need such measures.  However, there may be reasons to do need this mixture.  In these cases, follow your physician’s advice.

The best way to avoid otitis externa is to leave your ears alone.

Earwax is thought to be annoyance that must be removed.  In reality, ear wax (cerumen) traps bacteria and protects the ear canal.  Constant removal of earwax actually encourages infection to develop. It seems likely, therefore, that Phelps leaves his ears alone.

To learn more about otitis externa or other ear-related issues, visit: http://www.ohni.org